The Greatest Casualty, is Being Forgotten. 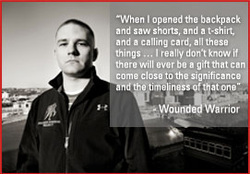 My most recent project for Justice has taken me to our nations finest heroes, the men and women of the US Military. As a volunteer for WWP I serve as a mission ambassador, representing all the WWP has to offer. The vision of WWP is "To foster the most successful, well-adjusted generation of wounded service members in our nation's history." The program raises awareness of the public needs of injured service members, and provide them with the assistance they need. In assisting WWP staff with their programs, keeping the motto, "it's about the warrior," in mind at all times.
My interest in this project was founded on my god-brother, Alex's misfortune. After joining the Marines, Alex came back from his second tour in Afghanistan earlier than expected. While we were happy to have him home, it was under the worst of circumstances. Alex had attempted to save his Marine Core brother by running into the line of fire, and in doing so he was shot several times in the leg. My god-brother almost bled to death that day. To this day, almost a year later, he still cannot fully stand on his own. A handicap that has left him unable to maintain a decent job in his field. While my family did all we could to help him, there was only so much possible. Thus we came to Wounded Warrior Project in search of help.
It was shocking to me that someone who gave so many years of his life, in addition to almost dying in the line of duty, was receiving minimal assistance from the country he risked his life for. It was time for a change. These men and women deserve  better than to be treated in such a way. The value of Social Justice in this scenario needed to be reevaluated. We are fortunate enough as a country to have a volunteer military, who put their lives on the line to save our and other peoples rights, yet when they return home they are treated with little dignity. These men and women deserve the rights they fought for.
Wounded Warrior Project assisted Alex in what my family and I couldn't, they provided him with the psycological comfort he needed to sleep through the night, in addition to assistance with economic empowerment and active community engagment. WWP saved Alex's life in ways that I couldn't. Thus I wanted to be part of the organization that gave so much life back to a darkened soul.
Wounded Warrior Project

When I was growing up, my mother thought it would be best if she stayed home to raise my sisters and I instead of working and sending us to daycare. But in this day and age, it is necessary, at times, for both parents to work full time jobs to support families. Yet,  even with two incomes, some households have felt the toll of the failing economy and have developed the burden of not being able to pay for childcare while both parents are at work. This predicament hit home when my godmother lost her husband and was forced to return to work with a 5 month old infant to take care of. Given that her entry level position only provided minimum wage, she didn't know how to continue, for her job provided enough for groceries and bills, but the added cost of childcare simply didn't fit into the picture. Thus I suggested she hire one of my friends, Kathy, who was in college near by majoring in child psychology. In a simple contract, we decided that Kathy would be hired as a non-paid babysitter  to gain experience with children. In return, my godmother was able to return to work.
It was obvious that my godmother was not the only one with this type of problem, and thus I created a service to match single parents and low income families with high school and students willing to take on the job, unpaid, for both volunteer hours and/or experience.
To this day, I have no received a penny for this project, and never plan on doing so. The simple service is simply the right thing to do. While doing simple checks on the people we match with parents, both parties are able to gain something, while easing the plight of struggling families. While this service does not fit the typical ideal of bringing about justice, it does help allow for equal opportunities for workers, so that parents are not deterred from returning to work simply because they have a child.
Bright Start Day Care

A Universal truth holds true,: the preservation of human life is key to success throughout civilizations. No matter your religion, race, or affiliation, basic human rights are not to be threatened. For if these naturally given liberties are taken away, chaos and standstill will succumb. However, as privileged citizens of the U.S. we find our selves amidst a global crisis as international governments are crumbling before our eyes. Nonetheless, we’ve seemed to have taken the backseat to these issues as of course they are ‘someone else’s problem’. It’s time for personal change in our lives, for a small sacrifice for us yields long-term stability for others.
For me, my family is my backbone. They are my courage, my strength, my reason and my support. Without them I wouldn’t be the person I am today.  My family is deeply rooted in the ideals and traditions of Jordan. However their eyes have been opened to the recent chaos in surrounding countries and throughout the rest of the Middle East. Fortunately, Jordan has managed to stay neutral and hold on to power with a constitutionally monarchy and representative government. However, Egypt, Libya, Saudi Arabia, and even Lebanon have been hit by traumatic failure in both government and economy. This has led to an influx in orphan children seeking refuge from their violent nations. These children have become forgotten casualties amidst the chaos and terror their home countries have succumb to.
Growing up without my family would have been the hardest thing I think I ever would have had to endure. Yet, imagining the physical and mental terrors these children have had to endure truly puts a realistic perspective on the situation.
Although Jordan is a thriving and free market economy, their funds have been exasperated by other means of nation sustainability. They are in dire need of support to keep these orphanages running and open to all children of the Middle East. In turn, privet associations specifically work and raise money to save and preserve the natural rights of these unfortunate children.
My Mother, Oraib Innabi, has always had a special care for children, and its circumstances like these where I see the anxiety in her eyes. She asked me to forward on the following information to all of you, in hopes that the future leaders of tomorrow will not only help, but also see need for humanitarian efforts in all realms of society.  For whatever career you may choose for yourself - doctor, lawyer, teacher - let me propose an avocation to be pursued along with it. Become a dedicated fighter for civil rights. Make it a central part of your life. It will make you a better doctor, a better lawyer, a better teacher. It will enrich your spirit as nothing else possibly can. It will give you that rare sense of nobility that can only spring from love and selflessly helping your fellow man. Make a career of humanity. Commit yourself to the noble struggle for human rights. You will make a greater person of yourself, a greater nation of your country and a finer world to live in.
SOS Children’s Village Association is a privet organization dedicated to these orphans who’ve attempted to find refuge in the Kingdom of Jordan.  I am passing on this information to you and your chapter in hopes that either collectively or individually you will become a sponsor for a disadvantaged child or youth. In short,  $98.73 USD is required  to sponsor a child for an entire year.

Here is a small overview of what SOS CVA strives to accomplish:

Every child belongs to a family:   Family is the heart of society. Within a family each child is protected and enjoys a sense of belonging. At SOS, children learn values, share responsibilities and form life-long relationships. A family environment gives the children a solid foundation on which to build their lives.
Every child grows with love  :  Through love and acceptance, emotional wounds are healed and confidence is built. Children learn to trust and believe in themselves and others. With this self-assurance each child can recognize and fulfill his or her potential.
Every child grows with respect  : Each child’s voice is heard and taken seriously. Children participate in making decisions that affect their lives and are guided to take a leading role in their own development. The child grows with respect and dignity as a cherished member of his or her family and society.
Every child grows with security  : Children are protected from abuse, neglect and exploitation and are kept safe during natural disaster and war. Children have shelter, food, health care and education. These are the basic requirements for the sound development of all children.


These are children whose voices have been silenced by their leaders mistakes. Jordan and the SOS Children’s Village Association are the driving forces in giving these children a second chance at life. This project was one of my personal favorites, for it hit close to home. I helped in sponsoring children with the help of my sorority and some fraternities and I hope to have brought justice to those children whose lives have been unfortunately plagued by such circumstances.